Sometime in the early 1990's (mid-to-late '92, as I recall), the developed world started to go through an upheaval. The word we were hearing everywhere was "downsize". People were being thrown out of work left, right and centre in the name of "efficiency", "productivity" and "profitability".

Shortly before, US President George Bush (senior) had announced that the end of communism meant that we could have a new world order. The phrase "economic rationalism" was increasingly being heard; buzz-words like those above were, apparently, going to be some of its hallmarks. (I couldn't then, and still can't, see anything "rational" about throwing thousands of people out of work and onto the scrap-heap - on any pretext, economic or otherwise.) 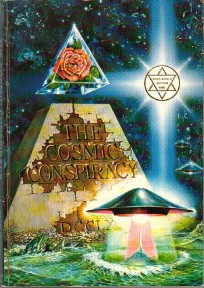 In the early 1980's, I'd read about the coming "new world order" in a strange book called "The Cosmic Conspiracy" by Stan Deyo (first published in 1978, by West Australian Texas Trading). Deyo didn't get everything right: he predicted (or, at least, gave every appearance of predicting) the second coming of Christ in the 1980's (OOPS); but now it looked as if he may have been right in this other matter. I pinned my (teddy bear) ears back and waited to see what would happen next.

Thanks to artist Vic Longbon for permission to include this scan of the book's front cover. (You can click on it to see a bigger version.) To cut a long story very short, a growing public awareness began to grow of something called "globalization". It was going to be good for everybody, of course. The world was becoming a "level playing field".

Oh, really? Not, apparently, if you lived in a developing country, and perhaps worked a small plot of land with maybe one cow and a small vegie garden. Tough luck - you didn't stand a chance, mate.

No: you needed to be a player in the economic world order. The global stock market was where it was at; you needed to be in it to win it. Sell your cow and buy some shares - you could make a killing! (If you didn't starve first...)

We'd had the "greed is good" decade of the 1980's (which has since blown out to a quarter of a century). Anybody could own anything; everything was up for grabs, and the highest bidder always won, of course. Stiff cheddar for the rest of us...

Now, even publicly-owned services could be sold off. In the new "reality", multinational corporations - collectively recognized as one of the modern world's greatest evils by much of the generation with which I grew up - could do pretty much exactly as they liked, with little or no restriction. All in the interests of "competition" and "prosperity", of course, with the hapless consumer claimed to be the big winner - the biggest confidence trick of our times.

It bacame clear that outfits like the World Bank, the World Trade Organization and the International Monetary Fund were in this up to their armpits. People began to wake up. I was as surprised as anyone else when the Seattle incident occurred on November 30th, 1999. Finally, "people power" might have a chance to put a stop to this madness.

This event, and the movement which sprang from it, became known in some quarters as the S11 movement (for September 11th, 2000 - the date when a similar event took place in Melbourne, and was met by the government of the day with violence in the form of police brutality, meted out by "cops in caps"; there were some very nasty injuries).

My own thoughts crystallized around that time, and resulted in the song which is the main subject of this page.

Of course, a lot's happened since then. What a coincidence - on September 11th, 2001, an ugly incident in New York gave the world a new symbol, 9/11 - and S11 disappeared off the radar overnight. How convenient...

What better way to take people's minds off left-wing rubbish like a movement against the injustice of economic globalization than to have a nice little war, based on lies and fuelled by public somnolence?

I'm Australian by naturalization, British by birth. It gives me no joy to acknowledge the fact that the governments of both countries with which I am associated are involved in these illegal and immoral outrages up to the hilt.

Anyway, to my song "The Loan Sharks". I believe it's still relevant - perhaps even more so. What follows - with very small modifications - is the essential content of a web-page I made up some years ago in the hope that some day I'd be able to get it on the internet. Whatever works, basically - to get people thinking. 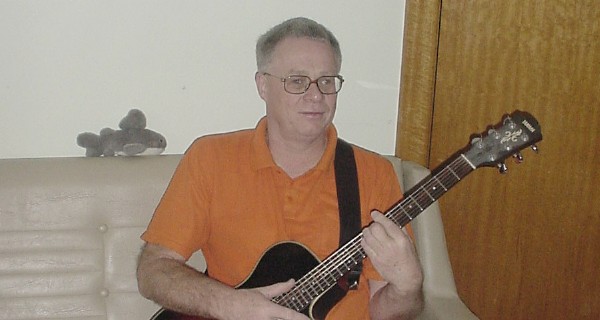 Before proceeding to the links for the music and lyrics of
the song "The Loan Sharks", please read very carefully

I maintain copyright over the music and the lyrics. I allow anybody to perform the song in public, subject to the following conditions:


Nobody is to profit financially from this song by any means, including performance, distribution, promotion, or in any other way. If you are a professional musician, and you'd like to perform it as part of a concert, that's fine - but please acknowledge the source of the song, and give your audience the URL of this website.

Also, if anyone wishes to perform it in public, the lyrics are not to be altered in any way - including additions, deletions, or any other modification. Similarly, I should like any performer to make every effort to adhere as closely as possible to the musical style of my original, subject to reasonable artistic interpretation.

VERY IMPORTANT In addition, note that I absolutely forbid use of this song in any connection with violent activity, whether by protesters themselves, or in association with any attempt to incite violence in other people. VIOLENCE IS RIGHT OUT!

The song expresses anger, certainly. BUT! There is a huge difference between creative anger and mindless violence. Being angry and using one's creative energy to try to change things is positive and commendable. Losing one's temper and lashing out is not only negative and ultimately damaging to any worthwhile cause, it is also just plain dumb.

Please tell like-minded people about "The Loan Sharks", and invite them to visit this site and download the song files for themselves.

If you have your own home page, feel free to put up a page with links to the music and lyrics of the song - either on your own system or as a link to this page. If you record yourself singing the song, by all means include a link to your own version; however, please include a link to this article in your page BEFORE any such links. (Better still, include this entire page in your own website, just as you see it here, along with a link to my home-page.) Make sure access on your page to any such link is free.

Also, if you do record yourself performing "The Loan Sharks", using either the music provided or your own playing (or a combination of both), you are welcome to distribute the result on tape, CD, or any other audio medium, provided you do not profit financially by doing so. Feel free to give the song out; I will allow you to make a small charge just to cover the cost of the medium (perhaps a dollar or two), but THAT IS ALL.

If you can get your performance of the song played on a media outlet (e.g. a radio or TV program), fine - go ahead, provided neither you nor the media outlet profits financially by doing so, and that the bans on incitement to violence are observed (see above).


Here is the link to the music, lonshrks.mid. You can have this playing in the background while you follow the lyrics below. (To save this midi file to your hard disc, right-click here. UPDATE, 23rd October 2010: I've just uploaded my 2.1Mb .mp3 version of the song; if you'd like to grab it, it's here.) 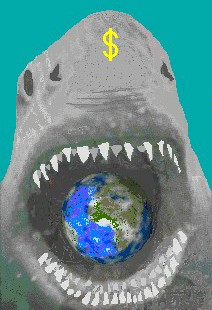 They come, dressed up in their suits and ties,
Wheeling their deals and spinning their lies,
But they just don't seem to realize
That the Earth's billions are seeing red.

They come from far and they come from wide,
Their hearts are greedy, their motives are snide,
And they think they'll take us all for a ride
As they kid themselves that rage is dead.

But as they file into swank hotels,
We know the air around them smells
Of greed, corruption, and evil spells
Designed to enslave the world.

They hide inside, and they lay their plans
To crush the spirit of woman and man -
The blood of millions is on their hands,
As their flag of shame is unfurled.

The price of their gain is the whole planet's pain -
Her agony increases with each sov'reign state they overthrow.

They think that we are such stupid fools,
Won't see the police as political tools
As bones are broken and teeth are smashed
While human rights and freedoms are trashed.

In Melbourne, Washington, Prague or Seattle,
Wherever they meet, we'll take up the battle,
And whether red, brown, white, yellow or black,
Make no mistake - we will be back!

And even though the Earth is maimed,
The people's heritage will be regained.
An age of justice will be proclaimed -
It's only a question of when.

So join with us in this vital quest!
They'll give of their worst, we'll give of our best.
Take careful note, I do not jest -
The times are a-changing again!

The times are a-changing again!

The times are a-changing again!


If you'd like to see the musical notation in addition to the lyrics while listening to the song, you can right-click to download the Noteworthy Composer file, lsmelody.nwc. If you go to Noteworthy's website, you can download their freeware Noteworthy Player, which will play the file for you.

If you'd like to download the lyrics (complete with guitar chords) as a .txt file, so that you can print it out easily, you can right-click here to download lschords.txt.

Return to Why is Mad Teddy mad? page