While at high school in the mid-1960's, I found in the school library some books which grabbed my interest. Three, in particular, had lots of electrical "things to make and do".

One of these books was "The Boy Electrician" by Alfred P. Morgan. This was already an old book even then, having been revised in 1940 from a book by J.W.Sims which was published in 1920 (or possibly even earlier - there seems to be some confusion about this).

"The Boy Electrician" was a "WOW!"-type book for boys looking for something exciting to do. (In those days, presumably, girls weren't - or, at least, weren't supposed to be - interested in doing exciting things!)

For me, the most interesting things in the book were instructions for making a Wimshurst machine, an induction coil, and what we would now call a bipolar (or half-wave) Tesla coil.

There was one thing in this book that caused me to raise an eyebrow, even in my early-to-middle teens. In Chapter XII, "INDUCTION COILS", there was a section on X-rays, which was introduced as follows (thanks to Lindsay Publications for permission to include this here):

Most young experimenters are unaware what a wonderful and interesting field is open to the possessor of a small X-ray tube. It is possible to obtain small X-ray tubes which will operate satisfactorily on an inch and one-half spark-coil. They usually cost about four dollars and a half. With such a tube and a fluoroscope it is possible to see the bones in the human hand, the contents of a closed purse, etc.

Another of these books was "Model Making for Young Physicists", by A.D. (Alan Davidson) Bulman, published in 1963 by John Murray.

Bulman's book had instructions for making numerous projects, not all of which were electrical in nature - for example, a Cartesian diver and a harmonograph, both of which I attempted. Again, however, the most exciting projects for me were the electrical ones.

Several of Bulman's projects looked like updated versions of similar items in "The Boy Electrician", which I suspect he may have read in his own youth. However, there were some originals as well. Definitely a worthwhile book.

The third of the three books was in fact, if I remember correctly, the first of the three that I found. Sadly, I've forgotten both the name of the book and the name of its author. (As a youngster, it would not have occurred to me to take note of the publisher!) Let's just call it Book X. It was of a basically similar type to Bulman's book. I seem to recall that the cover was essentially yellow, perhaps with some drawings in black illustrating some of the book's contents.

Book X contained some things in common with the other two. All three gave instructions for making a simple two-pole electric motor. There may have been plans for a Tesla coil in Book X, but I'm not sure. There may also have been a version of Hero's engine, which would have involved a bit of glass-blowing, similar to Bulman's Cartesian diver.

Anyway, among these books, there was plenty to interest me. Some of the projects in this website are based on ideas from all three.

Just before we start - two matters:

I asked my Dad if he would buy a copy of "The Boy Electrician" for me. He did find one - but it was nothing like the 1940 version!

It claimed to be "completely revised from the original book by J.W.Sims". It was written by "ARMAC", apparently a two-author consortium, and published by George Harrap and Co. Ltd. in 1965. It called itself the "eighth edition".

It was a dryer, much more sober work. In the preface, the following sentence appeared:

"Every care has been taken to avoid any work which might be dangerous to the unskilled experimenter, or liable to damage the family furniture or television set."

Oh, dear! How frightfully couth. It sounds to me like the beginning of both political correctness and the litigious nature of modern society. Who needs any of that?

Now, I'm all for safety first, as I'm sure you will see, if you haven't already. But this is a real dampener, in my opinion.

Almost entirely gone is the sense of excitement. The electric motor is still there; ways to soup-up your model railway are there; and the new age of the transistor is upon us, with some quite reasonable simple circuits to build. But! Gone are the Wimshurst machine, the home-made induction coil, and the Tesla coil - not to mention the "shocking coil", which made it not only into Morgan's book (as the "medical coil"

), but into Bulman's book as well! (Yes, you will find a version of this little beauty right here in this website - complete with suitable warnings.)

Also, you may be sure there is no mention in the "eighth edition" of home-built X-ray machines!

I'll confess, I was disappointed. But I kept the book; and I'm glad I did, for two reasons:

Firstly, some forty years on, it is in itself a historical document, providing some insight into how the modern electronic age started in the 1960's; and thus it's interesting from that point of view.

Secondly, a few years ago (2002), I found that Morgan's 1940 edition had been reprinted by Lindsay Publications Inc , as a modern paperback and with some grim warnings regarding safety, but with everything in it that should be - including the X-ray machine! You may bet I ordered a copy for myself pronto - so now I have both versions of the book!

(Have a good look around Lindsay's site. I'm not being paid anything to plug their products, but the site itself is very entertaining, and there is plenty there to make you chuckle. Also, this site is worth a look; among other things, there is a photograph of the new paperback version of Morgan's lovely old 1940 book. Again, I'm not advertising - only reviewing!)

I've just revisited the Lindsay site for the first time in ages. It's still there - but now there's only a "farewell" page, explaining that the site has been "shut down for retirement". (Pity - it was fun...)

However! All is not lost. By clicking on a few links, I found that it's now possible to download the original Alfred P. Morgan book "The Boy Electrician" as a .pdf file. How good is that?!! Click here and follow your nose to the download link. (An interesting aside: if I'm reading it right, that page's author has Asperger's Syndrome. Nice to find a kindred spirit...

One really good thing did scrape into the "eighth edition", though. There is a description of how to have some fun with an ignition coil! My Dad brought home such a beast, and we built it into a nice "sparky" little project, which I still have - and, yes, you will find it within this website.

Sometimes in life, you get lucky.

Some years ago, I was relief-teaching at my old high school. As part of the day's activities, I was in the school library with a class.

The staff were going through the library's old books, with a view to throwing some of them out. My eyes nearly popped out of my head when I saw "Model Making for Young Physicists" by A.D.Bulman - my old friend - destined for this tragic fate!

Here it is, somewhat old and battered, but now among my treasured possessions. (You can click on it to see a bigger version.) 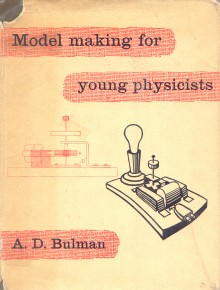 You will find a description of my own version of the little gadget depicted on the front cover, called a "synchronous wheel" by Bulman, elsewhere in this website. (If you click on Electromechanical models on the following menu, you will find a sub-menu with a link to it on the next page).

(Thanks to John Murray for permission to include this.)

Sadly, I didn't see either Morgan's "The Boy Electrician" or Book X among the books doomed to perdition. Anyway, as I mentioned, I now have the latest printing of Morgan - so, as the fat guy said, two out of three ain't bad!

One of the good things about physics experimentation at a "serious hobby" level is that it's possible to make some quite fascinating projects from bits'n'pieces that most people would classify as "junk". You can find much of what you need in "junk shops". (An occupational hazard of this sort of activity, of course, is that you may well become a "hoarder".

If you're lucky (as I must admit I have been), you may find quite a lot of useful things just "lying around". Occasionally, you may need to visit your local electronics outlet or other shops for some components; the best satisfaction, however, comes from building one's masterpieces as cheaply as possible. This is the philosophy I'm trying to promote in these pages.

"Power to the people"